Introduction: Although data obtained from regional trauma systems demonstrate improved outcomes for children treated at pediatric trauma centers(PTCs) compared to those treated at adult trauma centers(ATCs), differences between levels of PTCs, especially among transferred patients from other facilities is still behind the clouds of uncertainty. We aimed to assess outcomes of transferred pediatric patients based on severity of injury and level of PTCs.Methods: This is a 3-year(2017-2019) analysis ACS-TQIP. All children(age<15 years) with who were transferred from other facilities to Level I-II PTC were included and stratified into two groups based on ISS: Mild to moderately injured(ISS<25) and severely injured(ISS≥25). Outcome measures were in-hospital mortality, and major complications. Results: A total of 67,726 severely injured pediatric trauma patients who were transferred from other facilities to Level I or II PTC were identified. Mean age was 7±4 years,63.1% patients were male,83% had blunt injuries, and median ISS was 4[1-6]. Median transfer time for Level I and II were 93[70-129] and 90[66-128], respectively(p<0.001).87.2% were transported by ground ambulance. On multivariate regression, mortality was significantly higher among patients with mild to moderate ISS who were transferred to level II compared to level I(aOR1.72[95%CI 1.07-2.77],p=0.025). There were no differences between Level I and II in terms of mortality(p=0.480) and major complications(p=0.112) among severely injured patients (Figure). Conclusion: Our results demonstrate that level I PTCs are superior to level II in terms of mortality among the mild to moderately injured transferred pediatric trauma patients. Factors such as transfer time, may be considered when transferring severely injured patients. Further studies are warranted to identify which subclass of severely injured pediatric trauma patients may benefit from transferring to level I PTCs. 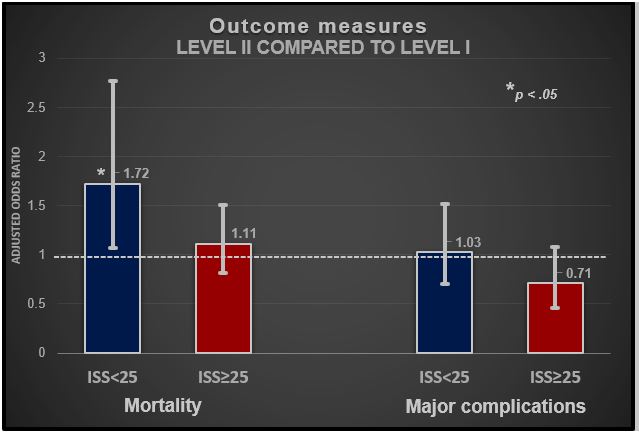